Lots of people have been asking Facebook to add a Facebook "dislike" button since Facebook added the "like" button to their popular website. Ever since then, many Facebook apps have popped up as well as third-party websites claiming to offer a "dislike" button. Some have even taken the length of telling you that you can be apart of a special "Facebook list" if you copy and paste a status update and share it with your friends.

Most of the time, these are scams. Sometimes, it's just a harmless stunt done by someone wanting to see how far their message will go, other times, these are deliberate scams that pose as the official Facebook to harm you and your Facebook profile.

What happens is that when you "log in" to a Facebook app, you are allowing it to have some special privileges over your profile and with that, they are allowed to do certain things such as post status updates for you without your permission each time they do it. Each app is forced to tell you exactly what they will be doing when you initially allow the app access to your profile. Pay attention to what they are being authorized for when this screen comes up.

What can tell you about whether an app is legitimately from Facebook or not can be told from a few things. 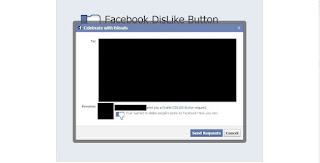 The above picture is from an app today about a "Facebook DisLike Button". The big blacked out part was a bunch of my Facebook friends' names highlighted asking if I would like to send them all invitations to be apart of the "official Facebook DisLike Button". If this was truly from Facebook, it would likely not be in an app that you would have to authorize. It would be a feature allowed to all members of the site. Secondly, Facebook would not ask you to send invites to all of your friends. 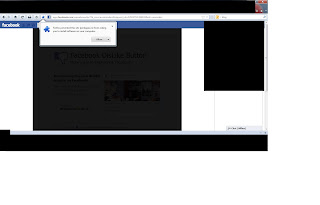 As I normally do, I said "Cancel" to sending invites to my friends. Upon doing that, a message appeared in my Firefox browser, asking if I would like to install the plugin from a site. That screenshot is available in the above picture. Notice where the website is from...it is not a Facebook website.

We can rule out that this app is most likely a fake. What you should do now is this:
1. Report the app.

Just like the picture above, there is a place down in the left hand corner of the page that will say something about "Report...this app". Click that button and report the app to Facebook for inspection. Doing this will make sure that Facebook is alerted to a possible scam on their users and more people won't be scammed like you almost were.

2. De-authorize the app. Make sure that the app is permanently and fully not attached to your profile in any way. Unlike the page, unlike the app, de-authorize it, do what needs to be done to be rid of this app.