Why Macs "Don't" Get Viruses

Apple used to have tons of ads claiming that Macs "never", or "rarely", receive viruses than PCs do. But many people may wonder why that is. Apple is implying with these commercials that their software is superior and made to withstand viruses which is not the case. Experts and those knowledgeable with computers understand why this really is.

Microsoft has had the majority of the computer industry for decades. Offices, schools, homes, and many more places have PCs and have had more PCs than any other personal computer out there including Apple's Macintosh computers. With that said, scammers have a choice of which computer to attack. They can either create exploits that will attack Macintosh computers, Linux computers, or Windows computers. Since the majority of users use Windows, scammers make software to target computers running Windows. In the last couple of years, Apple has been growing in the marketplace and taking over some of Microsoft's business from Microsoft. More people own Apple computers at home, workplaces are starting to use them more, schools are creating computer labs with Macs in them, and so on and so forth. Now Macs are beginning to see more viruses than previously and it's because more people are going to Mac. Since a majority of the users are heading in that direction, scammers see their opportunity.

A large percentage of the population is fairly computer illiterate or does not fully understand or know about all of the computer attacks. This makes them more vulnerable. Often times, a user will visit a webpage, then click back thinking that they avoided the attack on their computer. The attack already happened and a piece of software has been planted into their computer that was not seen by their anti-virus software. A few days or hours later, a window pops up saying that the computer is infected. The window looks legit, kind of like this one... 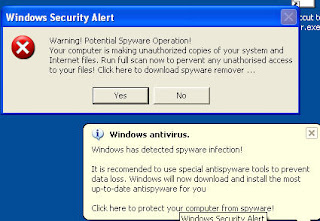 
The window looks very much like a typical Windows XP window, doesn't it? For a while, windows like this would pop up, and the best way to tell whether or not they were legit was because they didn't match the color scheme of Windows Vista computers, so users would have a better feeling that this was fake. Then when people began moving onto Windows Vista and Windows 7, the windows began looking more like how Windows Vista and 7 windows typically look to fool users. However, users on Windows XP would now be able to tell that this was fake because it wouldn't match their color scheme.

In a nutshell, it's not that Macs don't get viruses, it's that they get less viruses than Windows computers do. Linux is the same way, however, most Linux users will tell you that Linux is a much safe operating system than Windows or Mac are. This is due to how Linux has been built. It's parent, Unix, is even more safer to use than Windows, Mac, and Linux in terms of viruses. The downside is that Unix and Linux cannot run all of the programs that most users would like to run on their personal computers and too complex for other users.

Anyway, that's why Macs don't get viruses. As more people begin heading to Macintosh in the next couple of years, notice how many more Macs will get viruses. Apple attacks PC problems such as the infamous Blue Screen of Death, however, Mac has its own problems too.

In conclusion, don't head over to Mac thinking that you are going to be 100% safe. You will be safer especially if you use good judgement, but you won't be free from scammers' attacks, harmful infections, and software malfunctions.
Posted by ndh777 at 7/21/2012 11:48:00 AM