You can read the full article from Fox News here.

The court ruled that Samsung violated a series of patents owned by Apple and allowed Apple to win $1 billion for damages. The patents have more to do with the hardware specs rather than software although some of Apple's lawsuits have to do with Samsung allegedly "copying" the icons, most notably, the phone icon, from that of the iPhone's interface. One of the hardware lawsuits has to do with a patent of Apple's that has to do with rectangular devices with smooth edges which is something that Apple claims that Samsung borrowed without permission from them.

This lawsuit seems unfair from all angles. It seems that Apple is simply jealous of Samsung's success and is trying to hurt the company not through sales and legitimate innovation but through false attacks on their rival that is doing well for themselves. Although, the phone icon dispute is one that I cannot ignore and vouch for Samsung. Take a look for yourself: 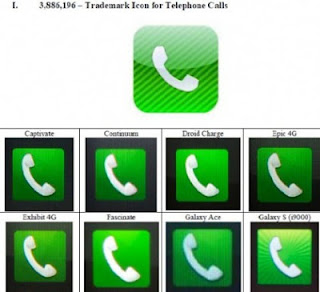 The icons look very similar. That website above also shows other similarities with other Samsung logos. I can't vouch for Samsung in these instances because these are quite clear. Google's Android OS usually comes with phone icons (for their Nexus devices) that look more like a blue phone and not usually in a box. While in Samsung's defense, green is a common color associated with phones for quite a while as it has been made as a way of letting the user know to answer the call and red being to deny the call. The phone design is very common and has been used for many decades such as on old telephone booths like the GTE booths in the 90's that look similar to this.

This lawsuit "win" is a blow to the cell phone industry as well as the capitalist system in whole. This tells people that by manufacturing a device or product, you run the risk of being sued because you may have inadvertently "stole" that design or idea from someone else. But when you truly think about it, Apple's success with the iPhone is due to many more people and companies prior to Apple's creation back in 2007. Apple stole the idea from the original cell phone designer, used the concept of the touch screen, used the concept of programs being executed by code and human interaction, used the concept of the camera, and many more concepts that made the iPhone what it is today.

The success of Apple and Samsung is due to people building on other people's ideas and products. Apple designed iOS and the iPhone back in 2007 and Google shortly thereafter acquired the Android project and made it into what it is today. Android isn't the end either. A new OS will come in the future and will build on what made Android so popular. Attacking companies like Apple is doing is simply dishonest and anti-progress. They are setting an example for the other companies: HTC, Motorola, Sony, and many more to beware of what they are getting themselves in. This lawsuit is just the beginning as Apple tries to be its own away from its competitors such as getting rid of Google Maps out of its phone and trying to build its own mapping software.

This blow hurts Samsung and will hurt future Samsung phones as well as phones made by other companies. Although, I doubt that the lawsuits are over and will stop from Apple's end. Samsung will probably make their own lawsuit and attack Apple for something that it is doing. Samsung will also hurt Apple by not making products for the company to utilize in their devices like the screen in the iPad made by Samsung.