Google and Yahoo have been around a lot longer than that of Bing. One of the good things about new programs, companies, etc. is that they often do things that their competitors don't to get more attention. The same applies to companies, programs, etc. that begin to decline in popularity, sales, etc.

Bing is different in many ways. At first, I left Google for political reasons and began to actually prefer Bing to Google as time progressed because it does have its strong points. One of the nice things about Bing are the rewards.

When you search for stuff online, you typically only do it out of necessity because you want to know more about something and all of the answers are right there in a search engine. Bing has made a way for you to use their search engine more because you can now get rewards for doing what you've been doing all along for free! The only thing is that you do need to create a free account with them. That can either be signing into your Hotmail account, Facebook, and I believe there may be a third option, but I am certain about the first two. You don't need both, just one. Not everyone has a Hotmail and not everyone has a Facebook, but chances are you have one or the other if you use a search engine a lot. And if not, both are free to sign up for.

Below are the current prizes that you can get through points you've earned on Bing. 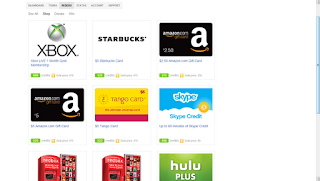 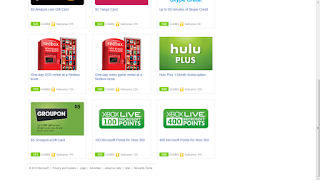 Unfortunately the page is a little bigger than I can grab with a screenshot, but you should be able to get the full picture by putting these two pictures together.

Of course, the prizes are not that great. Each prize is equivalent to about $5, but hey, that's $5 you won't have to spend. And the others like Hulu Plus and Xbox Live only last for a month, but, again, that's money that you did next to nothing for.

For someone like me, I'd either get the most out of my points by getting the Starbucks, Skype credit, or the Xbox Live points as they seem like ones that I'd actually use. Realistically, I'm thinking about going for the Xbox Live points because those will last longer and I'll use them. But maybe there's something here that catches your eye? And if not here, there are also two other pages.

You get X amount of points every time you search using Bing. I say X because I am not certain what the exact amount is. I believe that it's a point for every search you do and the maximum points you can get in a day is 10-15. For someone like me, I racked up points very quickly. I've only been using Bing, I believe a year and a half since I believe I made the switch on Easter 2011. Right now, I have over 1,000 points. I rarely think about the points but I noticed them today and thought that I might as well cash them in.

Since then, I've done quite a bit of blogging. Most of the information that I post here and my other blogs, I usually get from doing searches on search engines or by double checking my information against search engines to be sure that I have the most accurate information possible. As you can imagine, I do a lot of searches.

But, back to the main topic, if these prizes don't excite you, or you'd rather do something else with your points, you can also use those points towards sweepstakes and also donate your points and Bing (Microsoft) will donate on your behalf using those points. Again, don't get on Bing thinking that you'll win a car or cure cancer. Those "prizes" are still slim. Either you are put up against 1-1,000,000 different people for the same prize or you are giving Bing 500 points to donate $5. 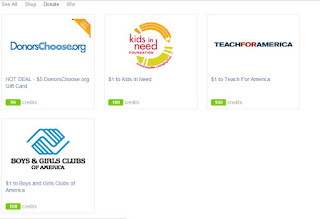 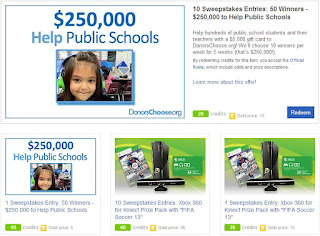 As you can see, the prizes aren't much again. But, you're not using any real money and it doesn't cost you anything extra to get these prizes except time away from your beloved search engine.

I'm not sure if it's only available to members or also to the general public, but you can try visiting this website to learn more about Bing Rewards http://www.bing.com/rewards/redeem/all

Do these prizes entice you to try Bing? Are you already using Bing? Have you received any of these prizes? This seems like a really cool thing that everyone should try before Bing decides to discontinue.
Posted by ndh777 at 9/29/2012 07:54:00 PM