Los Angeles to Get 4G LTE on Sprint!

Great news for those of us on Sprint with 4G LTE phones!

Like many other Sprint users, I have been patiently waiting the arrival of the LTE network and I've finally got confirmation and proof for those of us who live in Los Angeles, California!

Lately, Sprint has said to be hard at work on the network updates mostly dealing with the updated LTE towers but has rarely stepped into major U.S. cities which has caused many of us to grow impatient. Houston, Texas and recently San Francisco, California have been the only two major U.S. cities in the United States to get the LTE upgrade plus some minor cities and towns but now Los Angeles is getting its own.

While Sprint has not officially confirmed this through their Twitter, Facebook, or website, I have proof through screenshots on my Samsung Galaxy S III currently running TeamVenum's AnaKonda ROM. I've tested the 4G speeds and made brief comparisons between Sprint's current 3G as well as two tries on my home WiFi network. 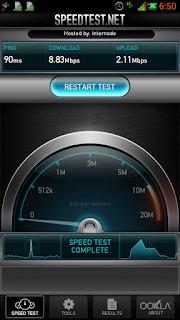 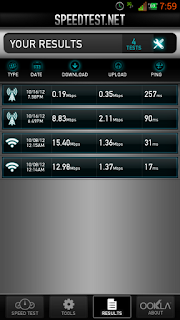 The first screenshot was taken immediately after the 4G LTE test was taken while the second screenshot shows my results from all four tests. The bottom two are of my home's network, while the middle is of the 4G LTE network, and the top is the 3G speed. If you look in the top right corner of the pictures, you will notice that the one says "4G" while the other says "3G".

Of course, I should have done at least three tests to show what the average speed is. But the 4G network is slow and not very reliable. The signal was lost when I moved my phone a few inches. The network is being built, nonetheless, and this is proof of that. I also say to wait for the full network to be released because many people in many cities across the U.S. are claiming to have over 20 Mbps download speeds on average which is more than double what I got on this test.

This is great news for those of us who live in Los Angeles. I noticed a 4G signal in two different cities in L.A. county, one being near Gardena and Compton and the other being near Lakewood and Long Beach.