I mentioned about a month ago the discovery of a few new 4G LTE towers popping up around Los Angeles. Since then, I've found spots in Inglewood, South Central, Gardena, Lakewood, Long Beach, Compton, Bellflower, and a few other southern L.A. cities that are showing 4G LTE for capable Sprint devices. I mentioned in my earlier post that the signals were weak and not easy to take tests of.

Usually the rule of thumb is to do a minimum of three speed tests to determine what the average speed is. To get an average speed, simply add all three results and divide them by three to get your average speed to expect. In other areas of the country, users are saying an upwards of 20 Mbps in the download speeds. My speed tests have not gotten anywhere close to that, but the speeds are decent enough to be called fast. Here are my results below in screenshot. I took these tests on November 13th but have been going through a few things so I apologize they are late. 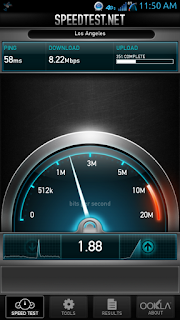 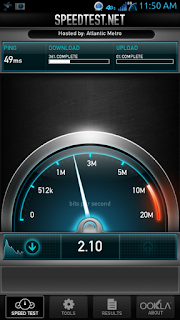 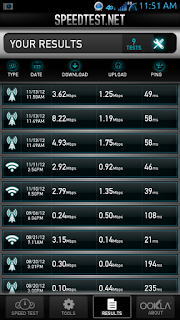 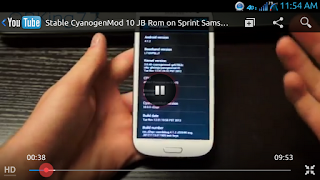 The speeds are not as remarkable as my first one but they are a start especially when comparing the speeds to Sprint's sub-par 3G network. The second to last picture is of all of the speed tests that I've done. Ignore the WiFi speeds for a moment and check out the first 3 speeds and the test done after the two WiFi tests. Those are the 4G speeds which are 3.62, 8.22, 4.93 Mbps download speeds. This is what matters most to us. The average is 5.59 Mbps. Not a bad connection at all. The second carrier test was done on 3G with a speed of 0.24 Mbps. I was very excited to see the 8.22 pop up.

The signal was very strong in this spot. For Bellflower locals, this is over by the new King Taco. I tried using some apps to test the speeds for myself and the bottom screenshot of a YouTube video is how long it took to load the video. Normally, that gray line that is barely visible because of the red circle is very close to the blue line which is not good if you want to watch a YouTube video uninterrupted. Normally my YouTube videos lag on 3G and I have to pause them and wait a few moments before playing them.

I've also been noticing that my 3G speeds are stronger. Not from the standpoint of tests like these, but when doing things like watching YouTube videos. My videos don't seem to lag as much as they used to. They still lag sometimes, but not all of the time.

If anyone is curious, I am running the Wicked Sensations ROM from TeamVenum with a stock kernel. I hopped on this ROM because I needed a ROM with JellyBean support and these are the same guys from my previous ROM AnaKonda which was also outstanding. When adding the ROM, I was forced in flashing some new radios for my devices. For those unaware and probably unrooted, when you update your phone with OTAs (over-the-air updates) you are accepting various updates which some also include new radios. These radios help keep your device connected with the best speeds possible as they upgrade the cell towers. I believe that my newly found speeds are the result of this new radio. For rooted users, we are required to manually add these radios in our recovery. I personally like it this way because I know what I'm updating, but for novices, it's best to accept OTA updates.

I'm noticing that Sprint is spreading out the 4G LTE network across the nation to more cities yet don't see any in New York which is a shame considering how populous it is. Verizon has, according to the Sensorly app, the best network coverage in just about any category including 4G LTE in the nation. AT&T follows, but not closely.