Technically, SimCity 2013 is not SimCity 5 as the PC SimCity that came out after SimCity 4 was Societies; however, many of us fans try our hardest to forget such a title even exists in the franchises' history. For the sake of this, I will refer to the 2013 version as SimCity 5 throughout this post.

I woke up fairly early for a Saturday morning to hear BlackHood4 tell me the news that EA's servers for SimCity were not working the first day it came out. I assumed that this was only for those who wished to play online. Not quite.

As I went to pay for my copy of SimCity 5, I noticed that the front had wording below that said, "PERSISTENT INTERNET CONNECTION REQUIRED TO PLAY. YOU MUST BE 13+ TO PLAY." I'll admit to you guys that I'm older than 13 years old but the other part had me worried when it said that an internet connection was required to play. I turned over the box to read the System Requirements and saw only a section for "Minimum:". Most games also have a spot for "Recommended:", but not this game.

System requirements include, as written on the box:


Notice that it says that a "Broadband Internet" connection is required. This is a fairly new feature that EA has implemented into the game, most likely to deter piracy and typical greedy corporation trying to prevent you from sharing something that you paid for with someone that lives in your house. A constant internet connection is required to save your games onto EA's cloud service. Your game saves will not be saved onto any local storage device you have nearby. You will need an Origin account, which are free, to play this game. It can get annoying as my internet connection is very buggy today and EA is having a hard time loading SimCity for me. It appears that everyday you open Origin to play this game, you will be greeted by this tedious screen. 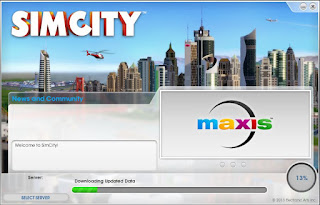 Once your game has finished updating, you will need to restart the game and then be able to play.

I want everyone to take note that EA seems to have taken some extra measures to ensure that the "PRTSC" button does not work when actually playing the game. I like to share screenshots with you guys and trying "PRTSC" while in the game has only captured what is going on behind the game, i.e. my computer's desktop background. Somehow they managed to trick Print Screen into thinking that the game is not being displayed.

When you finally get to play the game, you will see this screen for creating a game. 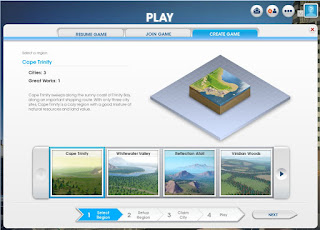 Like SimCity 4, SC5 has regions. In each region are a few spots to create your city. Some regions have only two spots for cities while some may have six. In each region, there are also circles. As far as I can tell, you cannot build cities here. I will explain these areas a little later as they are very important and can be quite useful. 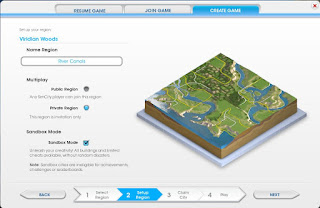 In the above screenshot, you can see that the game allows you to then name your region as well as choose what sorts of ways you would like to play. As I mentioned before, the game is completely dependent on a constant online connection. As such, you have no choice but to choose whether your region is made public so that any and everyone can join your region and become a neighboring city or if you'd like a private region that only people that you choose can move in. There is also a box for "Sandbox Mode". Most gamers should be familiar with this terminology but if you aren't, it basically means to just have fun without any sort of objective. With this, you will not be allowed to gain achievements which I suppose Origin now has some sort of achievement system. I personally don't care about achievements so I run in Sandbox Mode. I also choose Private Region because I'm worried about trolls and other people who would come just to ruin my city. I'm unsure of if people can hurt your city or not but I'm not trying it out right now. 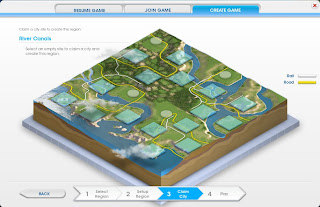 In this screen, you are able to then choose which area you want to set up your city in. Do you see the yellow and white lines across the map? The yellow lines tell you where train tracks are. This can be useful to you for providing your citizens with an alternative way to transport goods outside of the city as well as an additional way to bring in tourists to your city. 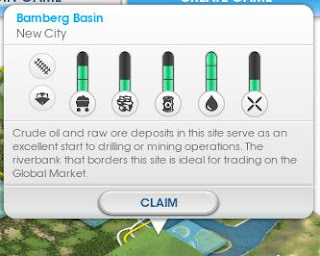 When you click on a blue square tile, this pops up. Each of these represents various resources a city square contains. Mostly all of the city squares have water while others vary when it comes to ore, oil, and the others. The other orbs to the left with a train track and a road indicate whether this city square is connected to the rest of the region through a train track or roads. Just about every city square that I've seen has roads while some have trains and others do not. When you are ready, you can click "Claim" to claim the land for your new city. 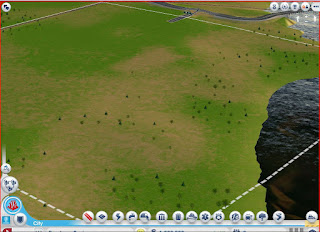 Here is what my city looks like from afar. I apologize for the cut off screen below. I am running SC5 in a window rather than full screen to take these screenshots and it's not fitting my screen very well.

This is how my city looks like before I begin building on it. It is quite beautiful. The graphics are a step up from Societies especially from SC4. These remind you of Sims style of graphics. However, while early reports indicated that sims will look more like how they do in the Sims series games, they are not that enhanced. They do look more realistic than they did in the previous SimCity games. I'm going to begin building my city and skip ahead to a screenshot much later in the game. 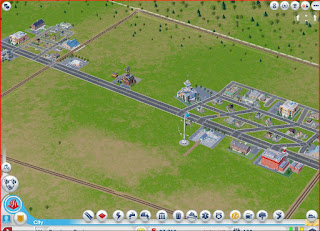 Here is a look at my almost completed city. I'm still learning how to use the game so my city is already in the red again.

Unlike the previous games, this SC utilizes real time whereas others, like SC4, used real time but differently. A second in real time was equivalent to a minute in sim time. Here, the game uses real hours. Once an hour has passed, an hour has passed. The game is currently telling me that I have just a few hours before my city goes into bankruptcy and services start closing. My citizens are angry because the taxes are too high but I had no other option.

I added a coal mine and oil refinery into the city to help generate some revenue and create jobs. Unfortunately, it looks like I created too many jobs because the residents were complaining that there were no places to shop.

Businesses will be built if you make the zones for them; however, they don't immediately begin running until they have enough residents willing to work there. It is a good idea to zone commercial zones nearby houses so that people can find work and have a place to shop.

For instances, my clinic was very small but I expanded the amount of ambulances and patient rooms it had to cater to more patients. My fire station and police station got upgrades with an enhanced tower coverage as well as helicopters. Police stations can have upgrades such as a detective wing and more jail cells. These will help you as you grow the city and help you cut down on crime. Fire stations can have upgrades such as a fire marshal who makes sure that buildings are safe and won't catch fire so easily. You can also add a hazmat team to your existing fire station. My solar wind panel got upgrades from traditional blades to blades that could generate more power.

Depending on your location, you may be able to get more wind power in certain areas than others. The same goes for water and other resources.

The game is lots of fun. It will definitely take some time getting used to and I'd recommend that new gamers spend at least a few hours in total on the game before deciding whether they enjoy it or not. At first, I play one and a half hours and I did not like the game. Later, I played for around four hours and began to really enjoy it.

There is a whole lot more to the game than I can describe here. If I took enough screenshots, I'd have to take one every few seconds.

As we've seen with other EA titles, EA will drop server support after a few years which will make this game unplayable. Some people still play SimCity 4 even though it came out nearly ten years ago. Can this game survive ten years? Who knows? In EA's defense, they have made it so that users can use custom servers to continue playing online. They may or may not do that for this game in the future.

What do you think of the game so far?