My Biggest Beef with the iPhone 5

I may or may not have mentioned yet, but I switched from my Samsung Galaxy S III to an iPhone 5. I can get into details later. For now, I wanted to explain my biggest disappointment with the iPhone 5.

Even when I had my iPad Mini, I knew this was a problem. Apple switched it up causing many of their loyal fans to be really disappointed. My biggest problem with the iPhone 5 has to be with the new charging system. I really do dislike it.

Apple has always been this sort of company that aspires to do things differently even if they don't make sense. However, they are a company that can do that and still stay above the competition. With their iDevice line, stretching all the way back to the early 2000's with their first generation iPod, we saw them introduce a new way to charge the iPod that had been used ever since then up until last October when they finally made a switch. The only exception to this were the iPod Shuffles that charge using a different method. But for every other iDevice: iPod, iPhone, and the iPad, it has been the standard 30 pin connector. Now, it's called the Lightning port or something that has to do with Lightning. Rather than using the standard micro USB charging connectors that most manufacturers use for their mobile devices, Apple has decided to, again, go their own route.

This is due to a few factors such as Apple simply wanting to be unique, a little bit of some greed, and, supposedly, a better mode of charging. Unfortunately, the designs and greed makes it quite difficult and frustrating.

One of the many reasons that I switched from Android to iOS was because iOS devices are much better on battery life and Android has been notorious since day one with the G1 for having terrible battery life.

But this new Lightning port has too many issues.

First off is the compatibility issue. As many loyal Apple fans have already explained, the switch to the new connector has left many upset. Many people had 30 pin connectors in their cars for listening to their iOS devices on the go, dozens of 30 pin chargers for those just-in-case moments, and all of those cool docks they used to have no longer work as before. They were prepared if anything were to happen to their primary charger. Now, with the new charging cable, it made it difficult on third party manufacturers and customers alike. Third party manufacturers now had to design new devices with new ports and scrap any and all old pieces that are now outdated. Customers now find themselves having to buy all new connectors and adapters to fit the old standard. This has been a major problem for many including myself. My parents had bought me an iPod dock/alarm clock many years ago when I had an iPod Touch 2nd Generation. It worked for me then and  I still have it to this day as my primary alarm clock for waking me up in the morning. Unfortunately, my new iPhone 5 cannot dock onto this one. If I wanted to get an alarm clock to dock my iPhone 5 with, I'd have to buy a whole new alarm clock. That is a major disappointment.

Similarly with the compatibility has to do with the new way of charging. Apple designed this new charging cable to only work on some outlets. Before, I was able to hook up my iPod Touch to just about any USB port and charge. When I got my iPad Mini, not every USB port was a charging port. The standards became much higher. Apple probably designed the cable to be this way as a way to make sure that you only charge using the best available outlets possible. I'm sure they had many complaints of people complaining that their iPhone wasn't charging quick enough on a USB port on their cheap wall charger. Either that, or this is a side-effect of another design that Apple had in mind and this is just one downside. I remember sitting in my car and trying to charge the iPad Mini on the USB phone charger that I have and it saying "Not Charging" in the top right hand corner. For me, I understand that not all USB ports are created equal. I even understand that not all USB 3.0, 2.0, etc. ports are all the same. I never really cared how quick the charge was as long as it could charge it and my battery wouldn't drain. I'm the type that has no problem leaving the device on the charger for many hours if it needs to be.

But last night really had me upset. I had been using my iPhone for much of the day and had not charged it on the charger like I normally would. By the end of my work day, my iPhone was at 60%. By the time I arrived back home, it was at 20%. I hooked it up to the wall charger and went to sleep. I went to sleep thinking that everything was fine and my iPhone would be at 100% when I awoke the next morning. Nope. The iPhone had been sitting there all night on the charger and stayed at 20%. Bizarre, huh? Well...thanks to an "ingenious" feature, the iPhone does not notify you as well as the iPad Mini can, that your device is, in fact, not charging. 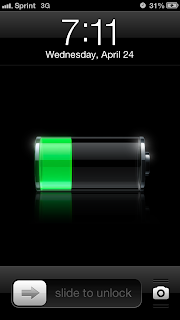 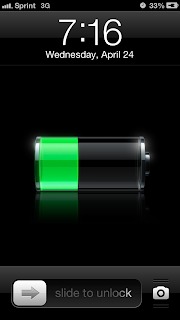 The only way that you may notice is either:
A) You're a genius at finding small things.
B) You're an Apple tech.
C) You got lucky/found it when you noticed the difference in battery percentages.

Notice the very tiny icon in the top right hand corner? The one beside my battery percentage? That icon "notifies" you when your iPhone is or is not charging. The difference being that one shows a lightning bolt signifying a charge and the other simply showing that a charger is connected but that the iPhone is not charging...if that makes any sense.

Admittedly, the iPhone has a good charging rate if connected to the right source. It's been a few hours since taking those screenshots this morning and the iPhone has been connected to my work computer all this time. It went from 36% to 96% in a matter of 2 hours and 15 minutes. That's not bad in my opinion considering that I've been using the phone from time to time as well as the Bluetooth and WiFi being on and not connected to anything. This is also a primitive USB port on this Windows XP computer that I am currently using so that speaks volume for how quickly it can charge. The iPhone battery can take a beating and that's really good considering that Apple made it near impossible to replace the battery for us users unlike Android consumers.

While that may seem like a bad thing for Apple to make it difficult to replace the battery, it actually works in our favor. For Android devices that have removable batteries, it allows manufacturers to be lazy and install the cheapest battery they can buy because consumers buy the phone and just say, "I was going to buy an extended battery anyway." But if the manufacturer makes it impossible to do so, it forces them to install the best battery possible and Apple has done just that. The iPhone and iPad Mini batteries are, by far, the best batteries that I have seen to date in holding their charge and charging at a reasonable time.

Apple software engineers have done a fabulous job at helping iOS manage its battery and usage. Constantly through the day, I forget that my WiFi is turned on. When I had my Android phones, I would immediately turn off WiFi, Bluetooth, and anything else that was not being used because the battery drained so quickly. However, in Android's defense, I did have widgets that made it easier to turn off many of these functions whereas in iOS, we do not have that luxury. We have to go into Settings, then find each one of these options and turn them off.

I suppose that my biggest beef with iOS has mostly to do with the hardware rather than the software. However, the software does play a role. I don't like that Apple continues to be so unique when it comes to chargers. I have friends that don't have iPhones but have devices that use micro USB ports and it would be nice to borrow theirs sometimes. While I can do it with the extended battery pack, I wish that Apple simply took the time to make a micro USB compatible port for the iOS devices for convenience. And I wish that the charger would be able to charge no matter what sort of USB it is inserted into. I suppose for Apple's protection, none of these changes will be made for users like myself.

As for this iPhone experience, it's been enjoyable these last three weeks. I've been loving the iOS interface and the experience overall and even bought a few accessories like a fold-out keyboard and extended battery. I'm always on the prowl for new, unique gadgets for the iPhone so if you have any to share, please feel free to share with me!
Posted by ndh777 at 4/24/2013 02:24:00 PM