At least here in California, I've seen quite a few new commercials about this new "T-Mobile" experience they've got. I decided to check them out for myself by just visiting their website which seems very promising.

What is new is that T-Mobile is offering customers a new way to buy phones. From Sprint, Verizon, and AT&T, customers are usually forced into buying a phone with a 2 year contract price. T-Mobile switches it up to get rid of contracts (in a sense).

When you go to a Chevrolet dealer, you don't sign up for a 2 year plan and pay a small price for your car. You eventually pay it all off as time goes on. I never realized it, but cell phone carriers are not like this.

Being on Sprint for me, I'd like to get an iPhone. However, I don't want to buy the 16 GB because it's not enough room for me. Here's their price on the iPhone 5's.

Sure, you pay $199.99 + tax for your phone and never have to pay anything more for the phone itself after that but you are locked into a contract for 2 years. If you got the most basic plan from Sprint for an iPhone, that would be the $79.99 a month plan. Over the course of two years with them, at that price, you'd spend $1919.76. That's also not figuring the extra taxes and charges that Sprint chargers customers.

Below is T-Mobile's price for the iPhone 5. 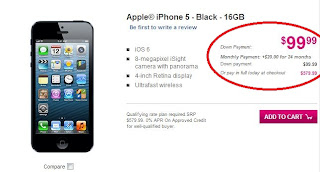 T-Mobile has a down payment of $99.99. Their cheapest plan will cost you $50 but that's with limited data. For unlimited everything, to be fair in comparison to Sprint, you'd get their $70 plan. On top of that, you'll make payments on your iPhone 5 at a cost of $20.00 for 24 months. 24 months is the same as 2 years so we can do the same comparison here too. Every month, you'll be spending about $90 for everything. For 24 months or 2 years, you'd spend about $2160. That's also not figuring the extra taxes and charges that T-Mobile charges customers.

The difference between the two plans is $240.24. In my mind, this seems worth it. Now I can have the phone that I want at a more reasonable price at checkout. Of course, I will be paying for it in the long term.

I didn't want to get caught up in this though. There are still other factors to consider when it comes to comparing two wireless carriers. We also need to factor in what exactly "unlimited" means for both plans, how large their networks truly are, how fast their networks are, as well as any other differences that may be good or bad.

When comparing prices, it's perfectly fine to compare based on what each company has written down on their website or brochure. That is the true price that they say you will pay. When it comes to defining words and how well a network is, it's best to compare using third-party sources not paid or endorsed by either competitor.

To tackle the newest struggle of unlimited, which is truly unlimited? For me on Sprint, I can vouch for their network and say that it truly is unlimited. No matter how much I download in a month's cycle, my 3G/4G is still available at the normal speed. When it comes to T-Mobile, you may want to read the bottom part of this page. Here's exactly what their page says, word for word in the bottom print below the plan details.

Limited time offer; subject to change. Taxes and fees additional. Participating locations. Domestic only. Not all features available on all devices. Unlimited talk and text features for direct U.S. communications between two people. General Terms: Credit approval, deposit and $10 SIM starter kit may be required. If you switch plans you may be bound by existing or extended contract term (including early termination provisions) and/or an up to $200 fee. Regulatory Programs Fee of up to $1.61 per line/month applies. Taxes approximately 6–28 percent of your monthly bill. Partial megabytes rounded up. Full speeds available up to monthly allotment; then, slowed to up to 2G speeds for rest of billing cycle. Roaming and on-network data allotments differ; see rate plan for details. Family Plan: Limit five lines. All lines must be activated in same T-Mobile market with same billing address and area code. Coverage not available everywhere. Network Management: Data traffic of postpaid plans with limited high-speed data allotments greater than 2 GB will be prioritized over other currently offered plans during periods of congestion. Service may be slowed, suspended, terminated or restricted for misuse, abnormal use, interference with our network or ability to provide quality service to other users, or significant roaming.

T-Mobile had announced this a few years ago and my co-worker confirmed it when he had T-Mobile.

In the past we have seen carriers do this when using the term "unlimited". In the wireless carrier language, "unlimited" does not necessarily mean "unlimited" or infinite. Many Sprint users had complained about this over various forums that Sprint had dropped them from the service for going over 5 GB in a billing cycle. T-Mobile says something similar to this on that same page in a link that you can find here.

"...if your total usage exceeds 5GB (amount is subject to change without notice; please check T-Mobile's T&Cs on www.T-Mobile.com for updates) during a billing cycle, we may reduce your data speed for the remainder of that billing cycle."

So is T-Mobile's plan truly unlimited? I guess that depends on which dictionary you use, theirs or yours.

The other thing to question is speed and availability. My cousin and I joked about this at Thanksgiving. I had a Samsung Galaxy S III on Sprint and she had one on Verizon with a new plan. Her new plan forced her to get a data plan that was not truly unlimited. But while we were sitting down, I had no 4G LTE and she did. We joked and said that my plan is truly unlimited, but it takes forever for me to download webpages while hers didn't take very long but she didn't have access to everything in the month so we'd basically even out at the end of the month.

This has been a problem for me and has caused me to overlook AT&T and Verizon plans as they do not offer any unlimited data plans. While they may have larger networks with faster speeds (not necessarily as Sprint's LTE service, when available, can be very fast, up to 40 Mbps according to some users in Texas) they don't give customers the availability to use it to its full potential.

In terms of actual speed, it seems to be unclear of what T-Mobile's 4G speeds are. I have looked and looked but I cannot find any sources that explain how fast their network is. Sprint has had a few people discuss theirs and I have too in doing my own tests. Sprint's 3G network is embarrassingly slow. I hardly ever use my phone to show anyone anything over YouTube and my phone's storage is piling up with songs because accessing the cloud is spotty over 3G. I would really need to know the details of T-Mobile's network speeds before being able to say whether they are better or not as good.

When it comes to network availability, T-Mobile is very vague on their website about what is available.

It seems like T-Mobile really doesn't want you to find their coverage map because you have to pass through three screens before finally arriving at the link for the map. Then the map itself is highly confusing. 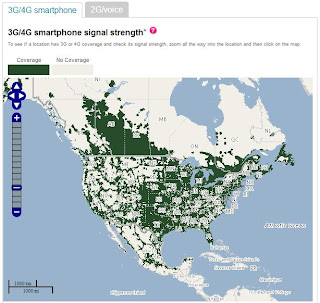 So you see that there is green and gray on their map. Some of the map also extends into Canada and Mexico. But notice that I'm on the 3G/4G coverage map. So...T-Mobile: where does 3G cover and where does 4G cover? In T-Mobile's 2G/Voice tab, it's pretty much the same coverage area.

Sprint is honest with their map when it comes to 4G LTE. Sprint is still building their network and will admit it as can be seen here. Users report, as I said earlier, that 40 Mbps can be achieved over LTE. For me, close by, 20 Mbps is what I can reach nearby. 3G is terrible in speed but seems to be everywhere in the nation including the northern U.S. which is usually non-existent for most carriers including AT&T and Verizon.

Things actually get more confusing when zooming in with T-Mobile's map. 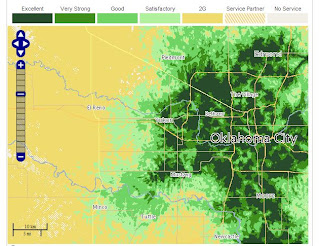 So it's nice that T-Mobile admits when they only have 2G coverage, but where is 3G and 4G? Is 3G "Good" or "Very Strong" and 4G is "Excellent"? Or what? I'm not exactly sure and I don't think anyone else can be either. For anyone that doesn't know, "Service Partner" refers to roaming on another network which would more likely be AT&T which is about the only other GSM carrier in the United States.

So...which is best? This blog post was started with the intention to discuss T-Mobile's new changes but then I began to think about how well it does compared to other carriers, mostly Sprint.

I have been considering getting a new phone and also leaving Sprint for some time. They've been a good company to me, but their speeds are just not my thing.

T-Mobile's new thing about how to buy a phone has really got me thinking that I'd like to switch. But I need these questions answered when it comes to their data speeds and availability.

Anyone have T-Mobile? What do you think of their service? What are your thoughts on the new changes? Is there anything else that you can see T-Mobile changing?
Posted by ndh777 at 4/06/2013 11:08:00 AM