Microsoft announced, a few days ago, that May 21, 2013 would be a treat for Xbox fans. On Tuesday the company finally unveiled their newest project set to release sometime in the 2013 Fall - 2014 Spring. Microsoft announced the Xbox One.

Not too many details were given on the nature of the new device. Microsoft release computer generated pictures of the console, the new controller, and the new Kinect designs to the public boasting of a more modern look. You can see for yourself in the image below. 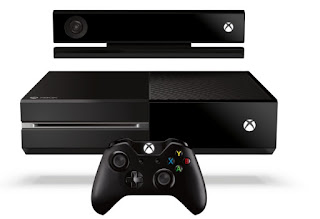 The above device is said to be the new Kinect design. The middle device is the new console design. And the bottom object in the picture is of the new controller design.

Not too much has changed between the latest Xbox 360 design and the newer design. The newer designs are more straighter whereas the 360 designs had been more all over the place with edges every which way. The controller appears to have the same buttons as before. The Kinect looks completely different; however, I should point out the odd place for the camera. We can probably expect to see a design change on the Kinect camera and possibly some minor changes to the console. I don't believe Microsoft will change the look of the controller too much.

Microsoft had stated that they have enhanced the Kinect experience more in this newer Xbox model. I believe the company as this will be the first time where they have a chance to develop the console around the Kinect whereas before they were introducing the Kinect much later after the Xbox 360 had been released. We can expect to see more and more games taking advantage of this new sensor in different ways than before.

The computer giant also stated that the Xbox will center around people's social life as the Xbox 360 has done with its evolution these past seven years. The Xbox One will feature the same features as before such as Netflix, Hulu Plus, Live TV, gaming (of course), and all the other features that are currently usable on 360 systems. Microsoft has said that Skype will be added to the device to allow video messaging between Skype users.

It's still up for debate as to what will happen with the backwards compatibility and our old Xbox systems. Microsoft has stated that Xbox Live Gold members will be able to use their subscription on the 360 as well as the new One device. There is still no official word on what Microsoft will do when it comes to using used games. Most speculation has centered around Microsoft preventing gamers from using used games as has been the norm since the beginning of video gaming; however, news continues to change as we grow closer to the official release date.

Overall, the console looks great, in my opinion. I can't wait to see more of the device as the year goes along and hopefully hear more news that's friendly towards us in the Xbox community. I worry about the rumors that are going around which causes me to not want to jump too fast onto the wagon when this device ships. I wonder if I should keep my Xbox 360 or sell it if I do decide to get the newer console. I was highly disappointed when I found that I couldn't play many of my favorite Xbox original titles on my new Xbox 360 when it first came out. But time will tell.