Sprint has been hard at work on this new LTE rollout to neighborhoods across the United States and is working very hard in the Los Angeles area.

A few months ago, even before the official announcement, I posted about Sprint's blazing fast LTE in Lakewood and Bellflower that hit speeds close to 20 Mbps which is faster than many household cable services including my own. Near my house, I have been getting an LTE notification on my iPhone 5 and was for a while on my Samsung Galaxy S III. Unfortunately, I would receive the signal but it wouldn't allow me to use any bit of the data and would load for an infinite amount of time.

Today, my internet at the house wasn't working too well so I switched over to the mobile network to find that LTE is working. I ran a test using SpeedTest.net's iPhone app and here are my results: 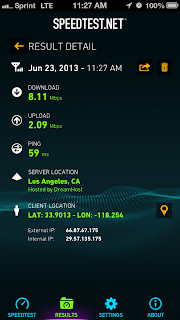 The result isn't perfect nor is it terrible. The speed was 8.11 Mbps in the download speed which is actually pretty good considering Sprint's slow 3G service.

Last Saturday, I traveled to Santa Cruz and on the way began losing reception but saw bits and pieces here and there with LTE service that ran pretty smoothly.

Props to Sprint for rolling out the new network. I and many other Californians can't wait to get the new network going. I appreciate the unlimited use of the network too. I have friends who have Verizon and AT&T phones and receive LTE everywhere but can't use it all so I'm very satisfied with Sprint at the moment.

What's going on in your neighborhood? Are you receiving LTE signals or has your cell provider announced a rollout of the new network?