These are the only two cases that I have for my iPhone because not only do they help it is to ever drop but they also have unique functions that help the iPhone perform in better ways. 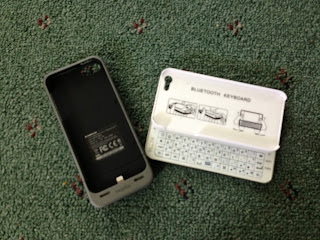 The one thing that detracts many from the iPhone is the lack of a physical keyboard. With this case, it brings something that these people have been missing. When attached to the iPhone, it looks like just another natural piece of it without any end.

It connects using the iPhone's Bluetooth feature and can do many different things. There are many versions of a wireless keyboard for the iPhone and this is just one of many. Here's a link to the exact one that I purchased on Amazon.

This model allows the user to type in letters as well as numbers. The downside to that is that it only has four rows of keys so inputting numbers can be a pain as they are towards the top of the keyboard where it's easy to bump your finger and you have to hold the FN (function) button to input each number. For someone typing in a password full of numbers or a phone number, this can get quite frustrating. The keyboard also allows the user to lock the iPhone and unlock it. Unlock only in the sense that it will spring the iPhone to the unlock screen where you will have to use your finger to swipe to unlock and/or input your security code. The keyboard also acts as a home button. This can be good for anyone who has an issue with their home button or just feels lazy. The keyboard can also bring up the normal iPhone keyboard on the interface in case a character can't be found or for whatever other reason may arise.

The keyboard has a backlight on it that allows for typing in a dark area. The keys on the keyboard are not the best that could have been chosen. They feel a bit clunky. While the keys are normal QWERTY, they are not sized appropriately like other keyboards are. All of the keys are exactly in rows and columns to make a perfect rectangle. This can be good for some and not good for others depending on your preference. I prefer keys not perfectly aligned when I type.

The shape is nice but it can feel bulky for some who are used to the sleek design of the iPhone. It's about the same size as two iPhones stacked on top of one another and feels a less in weight than two iPhones together. The keyboard folds out like any other phone that has a keyboard. It even has that click sound that most have. It feels durable as if it can be flipped back and forth again and again without breaking. It sort of keeps that nice look to the iPhone from the front where it doesn't detract from the sleekness. From the side, it looks fairly natural as if it belongs on the phone. It is a tight fit; however, possibly too tight as it can be a bit challenging to remove.

The internal battery is said to last on standby for over 45 days without being in use or powered on. I haven't used mine is quite some time and it charged fairly quickly signifying that the charge was kept all that time without decreasing.

This is nice for anyone who cannot live without the keyboard but wants an iPhone. For me, there are lots of problems that cause me to not use this as my daily case. Below are my biggest concerns besides what's mentioned above:
-Since it uses Bluetooth, it can drain the iPhone battery a bit faster than before. It hasn't been a huge issue for me because my iPhone is pretty good on battery usage.
-It can be a bit of a pain to keep turning on and off when not in use.
-It is a keyboard meant for landscape viewing, in other words, can only truly be used on its side. This can be problematic as it doesn't allow for easy typing on apps like Facebook or Instagram that don't tilt to the side when typing. It also feels odd using it on the homescreen. But I have seen Cydia apps for jailbroken iPhones that allow for custom orientation changes so it probably won't be an issue for jailbroken iPhones.
-It requires a separate charger than the iPhone does. It uses a Micro-USB charger while the iPhone requires the lightning charger (for the iPhone 5) so you'll need two outlets to charge at night if you want to charge both.
-It takes a while to connect via Bluetooth when first connecting.

Like I said, it's nice and can be used daily, but has a few issues that cause it to not be used everyday for someone like me.

At a first glance, you may think that it is just like any other iPhone 5 case. But it isn't. In the picture above, do you notice the lightning port inside of it? This connects into your iPhone from the bottom and becomes not only an external case but also an external battery. This battery is said, on the package, to give the iPhone 5 an additional 6 and a half hours of battery power.

The idea of this isn't to be on 24/7 giving your iPhone a secondary battery but to give it a charge when you need it. It is recommended on the packaging to not charge if the iPhone has 80% or more battery power. It says that the device will consume twice as much power which drains it quicker. It has been good and has given my iPhone a quick charge when I'm out and about. There has been a few times where I have been away from home and forgot my charger but was able to charge my phone because I had this case.

The case doesn't get too hot which is a good sign. It can get a little hot when charging but not like other phones do. It is a fairly quick charge and can bring your phone from the low 20%'s to 60% in about 30 minutes to an hour depending on the condition of the Mophie.

The packaging does say that there are only about 500 charges in the case so don't use it every time you need a charge.

One of the reasons that this is my daily case is that it also does something nice that Apple missed on. Apple decided to change from the 30 pin charger to the lightning despite many asking for a Micro-USB port instead. This was done for control and because the lightning charger supposedly charges quicker than Micro-USB can. This Mophie case allows the iPhone to charge using a Micro-USB charger. Simply connect it to the bottom of the case and it charges not only your Mophie but also your iPhone at the same time! The Mophie doesn't take long to charge from 0%. There is an LED indicator on the back of the case that will show the current charge of the Mophie. Clicking a button will show 1-4 LED lights flash to let you know approximately how much power is left.

The Mophie also corrects something that Apple failed on. I never noticed, but the iPhone 5 has speakers that point downward. Imagine listening to music through the speaker. If you are listening to it in your hand and not on a table, the sound goes down. But the Mophie directs the sound towards the listener which does give a significantly better sound.

The biggest downsides to the case are that it requires a little extra effort or an extension if you are hooking in headphones. The case not only comes with its own charging cable but also an extension for the headphone jack. I use this for my guitar jack as it can't fit in the Mophie hole. But for my Apple earpods, they fit just fine in the hole. The other downside is that the case makes the phone slightly more bulky which detracts from the beautiful design of the iPhone. The other downside is that you cannot hook the Micro-USB from the case into your computer and connect to iTunes. However, you can connect to iTunes wirelessly through WiFi or simply removing the case and using a lightning charger. Removing the case does take some extra effort at first but after a few times it becomes second nature to remove.

I use the Mophie case everyday. I have dropped it once or twice and it has still kept its sleek back and corners. It has kept my iPhone safe and me happy with its convenient charging on the go. While it may not be enough protection against someone throwing it against a wall, it can protect the shape of the iPhone from dinging against the edges or removing the shine to it. It does have rubber padding on the interior that does make some small marks on the back of the iPhone 5. The iPhone 5 has a different back than the 4 and 4S do which may differ from the Mophies available for those models.