I decided to continue my review where I left off by creating a new post for the review on the plane. I'll leave a link from the other post to this one so people can continue where they left off.

The plane did not meet my initial expectations. While I didn't expect anything that you'd find at a hobby store, I didn't think it would be this cheap.

The controller is a very cheap grade of plastic. The kind that you would find on most toys found at any bargain store like Big Lots or the 99 Cents Stores. However, once all four AA batteries are in, it has a nice weight and it feels decent for holding onto.

The actual flight is a different story. It took me a while but I finally got it in the air for a short while.

After a few flights, the bottom picture is what happened to the plane. 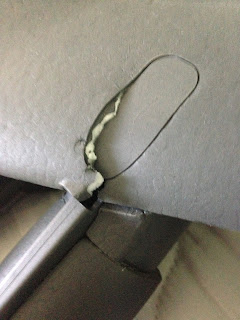 It's nothing too major as it can be fixed probably by just moving it back up or using glue. It might even fly as is without any restrictions. But this just shows that it can't take a beating so be extra extra careful.

Below I'll include a video of me actually flying the plane unedited. You can see at the end what it looks like as well as that's when I stopped recording.

The plane makes a little bit of noise but nothing that will drive you insane. The connectivity is kind of funky in that it doesn't always reconnect to the controller.

For example, when I was flying the plane, as I went to pick it up, the plane wouldn't respond to the controller. So I had to switch the controller off for a few seconds then switch it back on and then it was back to working. The same thing happened when I inserted the batteries into the controller. I turned on the controller then tried to test the rotors to see if it worked and it didn't work for a few times until it finally came on.

The directions are not that great. As I mentioned on the previous post, I plugged in the battery into the charger before plugging it into the wall. But the charger's lights came on and then it started to smoke. After taking a closer look at the battery, there are small ribbons on each of the cords that say "charger" and "Power". Still, the directions didn't say to not plug both of those in there at the same time. I believe to charge it, you must only have the charger cord connected. The charger is confusing as it has two slots too so I imagined that both would naturally go in at the same time.

The controls are difficult but easy to get the hang of.

After watching my first flight, I don't think this will be my last flight. While it's not the perfect RC plane and definitely not worth paying $169.99 for (of course, WITH the actual game, a graphic novel, and poster), it's not an absolute piece of garbage as I once presumed. I plan to fly it in a larger air space with less wind. I may or may not video record it and share it here if and when I do.