It's that time of the week, everyone!

This week's iTunes Single of the Week is by the HAERTS and is called "Wings".

Fans of games like Minecraft will love this free app of the week for iOS devices! Games like Minecraft have been increasing since its release in 2011. Toca Builders is just one of many but plays its own unique spin on the gameplay. 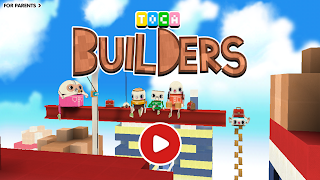 Toca Builders is a game more designed not around first person view or even one character, but multiple characters that help the player design the world they want to see. The game is also different as it's been designed more for children than for adults whereas Minecraft and other games have been geared for older children in their young teens to adulthood.

If you've downloaded the game and ready to play, let's begin! To begin a game, click the red triangle on the title screen. It will bring you to a screen similar to the one below. 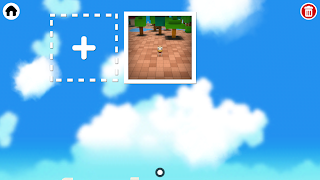 Your screen may be a bit different than mine, yours may only have the figure that is a hollow box with a plus sign in it. Clicking this will create a new world for you to build in. If you have any other boxes like mine above, these are previously used worlds. If you want to delete these worlds, just click the red trash can in the top right hand corner and select which world you want destroyed. 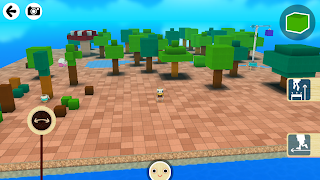 Now that we've stepped foot in the world, you can see how it looks. If you are a first timer, your world may be a bit blank unlike mine. Once you've played through the initial tutorial, you can have worlds that look like mine above with trees and mushrooms.

As I said before, Toca Builders is a game that centers around more than one character. Each of these characters have abilities critical in building the world you want to see. 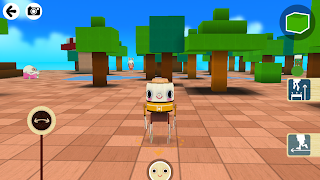 Above is the first bot you will start off with.

His ability is to create blocks beneath him. You can see the block that I built in the below screenshot. 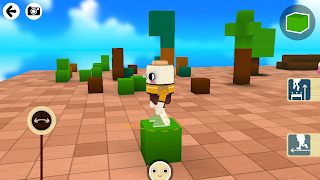 Wherever he stands, he can create a block beneath him and can go up 6 blocks high.

To move him, use the controls to the right of the screen. The top blue button will make him build a block and jump. The lower button will cause him to move forward.

For all builders, you will move them side to side using the left control. Move it to the right to move your builder right and move it to the left to make him move left.

Each builder can use many different colors in their ability. To change the color, click the button in the right hand corner which should have a colored block in it. Doing so will bring up the bottom screenshot. 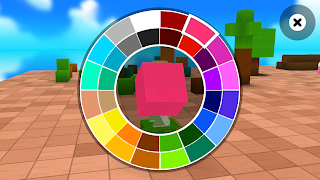 Simply cycle through which color you'd like your builder to use and then continue building!

As you can see in the bottom screenshots, you can see this builder building using different colors. 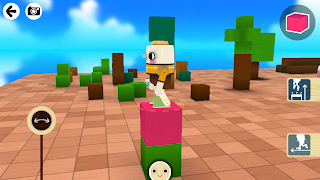 If you grow tired of this builder or want to do something different, you can change builders using the bottom face on the screen. This will bring up the bottom menu. 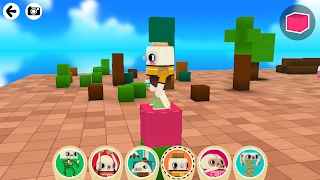 There are currently six different types of builders on the list. The builder that we had been using was number four from the left. You can see that he has a dotted circle surrounding him in the menu.

Alternatively, you can change characters by simply clicking on them when you pass by them in the world. 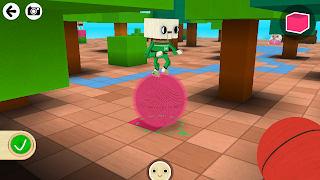 The first builder in the list is the one in the above picture.

He has the ability to color blocks wherever he moves using the ball beneath him. What's different about this one is that you will need to use the ball in the right hand corner to move your builder. Moving this one in any direction will cause it to paint the beneath blocks the paint chosen. It's a pretty fun way to paint the ground rather than putting down one block at a time.

You can change colors using the above method. 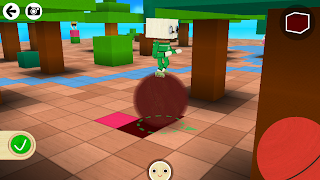 If you need to move from one area to another but don't want to paint in between, you can click the green checkmark in the left side of the screen. 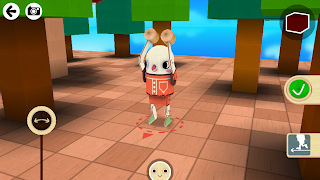 His job is to create blocks behind him as well as destroy any blocks in his way using his fists.

To move him, he's very similar to the first builder in that you use the left stick and the right control. 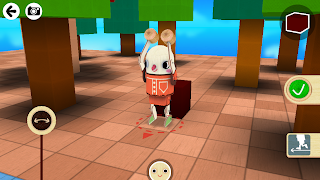 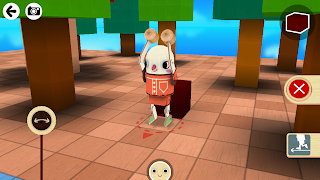 A red X instead of a green checkmark means that you have clicked the button and want him to not put down any blocks behind him.

If he comes across any blocks, he will destroy them. It seems that he can only destroy blocks that are the same height as him. Any blocks above him cannot be destroyed by him. He can destroy only three blocks that are atop one another. He cannot destroy any that are four blocks above. 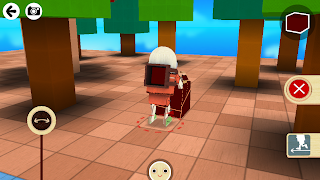 The next builder is a crane like character. Their ability allows them to move blocks from high up and from one place to another.

This builder moves like a spider from side to side using the ball wheel. 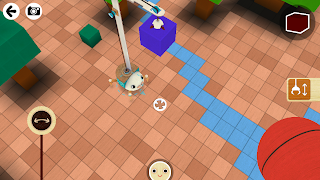 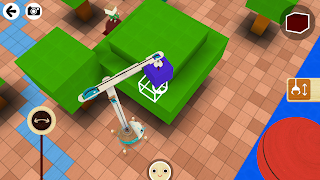 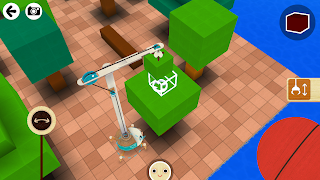 The next builder in the list is really the first one you start off with. But we already reviewed his abilities, so we'll move to the next one which happens to be the one below. 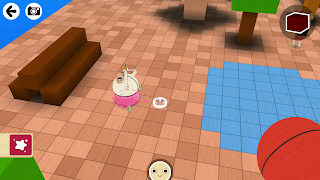 This builder doesn't seem to be able to move at all. Instead, they use a cannon to shoot anywhere they want on the map. This cannon shoots a dye that can change any desired block to any color. As said before, to change colors, use the color changer in the top right hand corner. 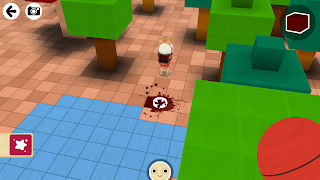 Wherever the white circle reticle is on the map, if you click the left button, it will shoot dye there and cause that one block to change colors. Any paint splashed anywhere else will not color in those tiles.

To move your reticle, use the ball in the bottom right hand corner. 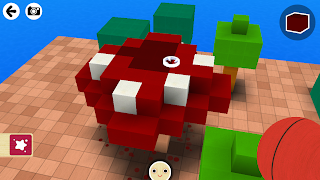 The next and final builder has the ability to move up and down using a unique spine that can extend it up and down. It can create five blocks directly above it and also destroy any blocks in its way.

It cannot create blocks beneath nor in its place. Any blocks it place will be above it and up to five blocks high. 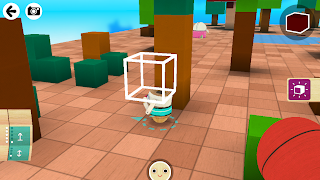 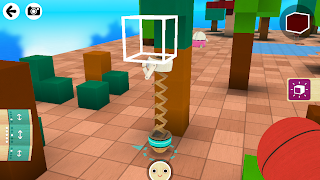 Below, you can see the builder destroying a block in its path. 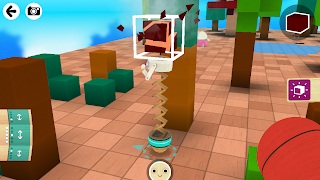 All of these screenshots have been taken using the iOS' built in screenshot function which is holding the power button plus the home button. Toca Builders has also placed its own function directly into the game so that players can take screenshots using the game and a press of the finger.

In the top left hand corner, there is a picture of a camera. Click this will take a picture and the screenshot will look like the one below. 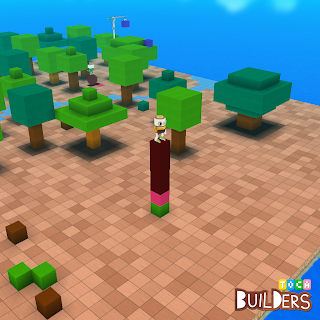 As you can see, there is also a watermark in the bottom right hand corner.

Personally, I prefer the iOS' screen capture to this as the screen is wide rather than this and it doesn't have the Toca Builders watermark. But this is ideal for anyone who wants to share using something like Instagram that currently doesn't use wide angled pictures.

Below is what happens when you take a screen capture using the in-game camera. 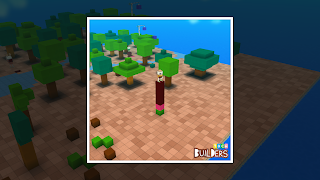 The game is fun and seems to be driven mostly towards young children but it seems like something fun for older children and adults alike.

This may not be a replacement for other games like Minecraft, but it takes an interesting spin on the genre.

I have not seen any in-app purchases which is a plus for many. For parents, this is great as you won't have to worry about your children making large purchases in-game and when you buy (or get it for free this week), you know there are no catches to the game.
Posted by ndh777 at 11/29/2013 12:15:00 PM